Where do you get your inspiration to cook? Colourful cookbooks, foodie blogs, magazines – there are a lot of sources for cooking creativity. Today I am sharing my favourite movies about cooks, chefs, food and love. They give me tones of inspiration and ideas. Also a good plan on Friday night at home – many of the movies are family friendly. So tuck yourselves in a cosy blanket and push the Play button! Hope they will be a lot of inspiration for you! 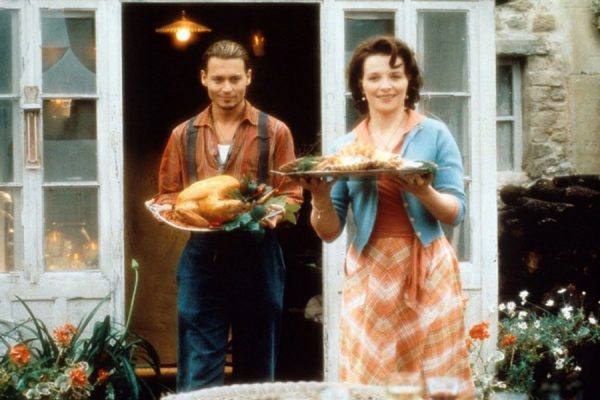 Carl Casper works as a chef in a prestigious restaurant. But one day he loses a twitter “war” to a famous food critic and has to leave his job. He gets a food truck and goes all the way through the country from Miami to Los Angeles, teaching his son to cook and serving top-quality sandwiches in every single town they stop.
An inspiring movie about loving what you do, about family and relationship.

A young and talented cook comes to work for a famous chef in one of the best Paris restaurants. And though their tastes aren’t quiet similar, they manage to turn their differences into stunning dishes to make a revolution in gastronomic art.

The elderly and pious protestant sisters Martine and Philippa who live in small village in Denmark happen to cover a Parisian women running from fascists in France. She pays for her stay cooking food for them and helping around the house. One day she receives a major lottery win – 10000 francs. But instead of returning home she decides to spend all the money on cooking a real French dinner in honour of Martine’s and Philippa’s farther.
A movie that makes you feel how important small joys are. Tasty food can not only change the mood of the dinners but make them the best people they can be.

Emma is a Russian immigrant who lives with her husband in Italy. A member of a powerful industrial family, she is the respected mother of three. When the head of the family decides to divide the company between his son Tancredi (Emma’s husband) and his grandson Edoardo Junior (Emma’s son) things don’t come out as expected. Edoardo doesn’t want to rule the company, he wants to open a restaurant with his friend Antonio. When Emma meets Antonio her life changes.

The play of Tilda Swinton adds much to the beauty of this story. Love and cooking? cooking and love. So inspiring!

A story about freedom and illusion of freedom, about love and friendship. To a small French town where the highest moral value is tranquillity comes a woman with her daughter to open a chocolate shop. Vian has a gift to guess people’s heart desires and help them get them what they crave – with an old Mayan chocolate recipe. But not everyone is happy about Vian’s shop, the mayor of the town is too much into prudence to let sell chocolate in the time of fast. Will the conflict make Vian leave and wander as she did before?

A very funny and soul warming comedy about one cafe and its owner. Zinos Kazanzakis owns a small restaurant on the margin of Hamburg. He named it after a song by his favourite band – The Doors – Soul Kitchen and he tries to put as much soul as he can into cooking those 3 lines of menu day after day. But suddenly all goes wrong.

A story about love in a restaurant kitchen. Young and ambitious chef gets a job in a very prestigious place. But somehow he finds himself in love with one of his colleges. The hard choice to make: love or career.

The biographical story of renown British food writer Nigel Slater. Do you know how difficult it sometimes is to earn father’s attention. And even more difficult to earn his praise. Nigel is fighting his stepmother for this kind of prise. And their battlefield is kitchen.

She is an extraordinary chocolatier who hates to be in the spotlight. He is an owner of a chocolate factory that is dying because he’s too enclosed to sign new contracts with shops. When two very shy and emotional people meet each other, it’s very hard to express their feelings. The only thing that can help them is their mutual love to… chocolate.